What are horizontal lifeline systems?

Horizontal lifelines are designed to offer protection, as their name suggests, for horizontal work in which there is a risk of a fall to a different level. Moreover, collective measures cannot sufficiently protect against this risk.

The regulations are clear with regard to the horizontal nature of the work. Lines of this type cannot deviate more than 15º from the horizontal plane.

What are the applicable standards?

Before the latest amendment made in 2012, horizontal lifeline fall protection systems were regulated by the EN 795/1996 standard, in sections C and D, flexible and rigid lines respectively. In addition to horizontal lifelines, this law also regulates the anchorage points, in their various forms.

EN 795 has always been a "controversial" product standard. As already explained above in (APUNTAR ARTÍCULO), it has never received the unanimous agreement required by the European Union.

With the updated EN 795:2012 standard, things have become even more complicated, as its scope of application is now limited to:

Systems to be used only by a single user. Most, if not all, the permanently-installed horizontal lines and almost all temporarily-installed lines on the market are for more than one user.

Systems that can be dismounted for inspection. Elements anchored to structures are expressly excluded from its scope of application.

The management of this situation is now complicated, given the fact that everything excluded from this standard is to be regulated in Technical Specification TS 16415.

What are horizontal lifelines used for?

Horizontal lifelines are primarily installed as fall arresters, although, in some cases, they can also be installed to prevent falls. This latter case is known as fall restraint.

When mounting a fall arrester lifeline, either an estimation (rigid lines) or a  calculation (flexible lines) must be made to determine the minimum free fall distance required and the forces that will be generated by the fall.

On the other hand, a fall restraint system is installed when, regardless of whether or not the minimum fall clearance distance is achieved in the calculation, the fall arrest system is used in such a way as to prevent the fall from happening.

Horizontal lifelines can be either flexible or rigid. 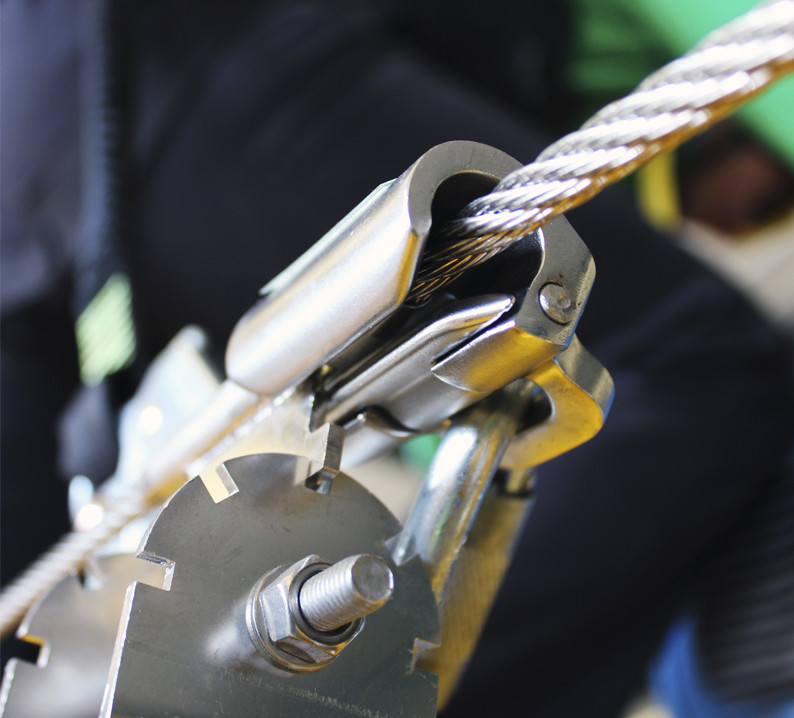 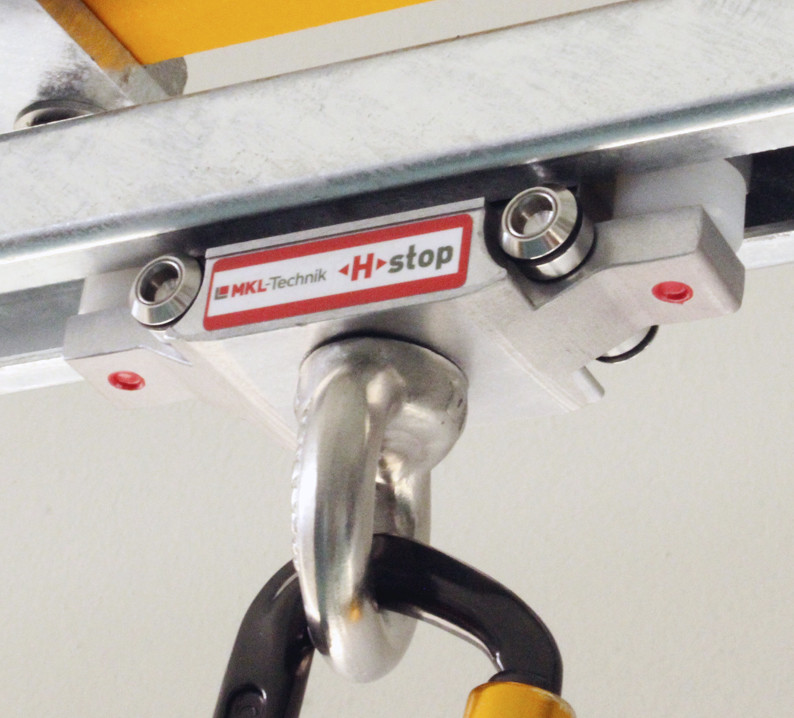 As its name suggests, a flexible anchor line is made with materials, metal cables or work ropes that deflect with the impact generated by the fall. On the other hand, it should be mentioned that flexible lifelines are not generally designed for suspension work.

Based on the type of fall and, consequently, on the resultant impact, the cable will perform differently, with regard to the amount of stretch and also the amount of force transferred to the end anchors.

Consequently, it is not possible to standardise the calculation for flexible lines and create a generic calculation that could be used in all cases, instead calculations needs to be made on a case by case basis.

On the contrary, as rigid lines have no deflection, it is possible to calculate beyond the minimum estimated loads of the standard (EN 795-D).

Thus the obligation to make a calculation for each flexible line established in standard EN 795-C makes sense. The main aims of the calculation are to determine:

The Load at the End points 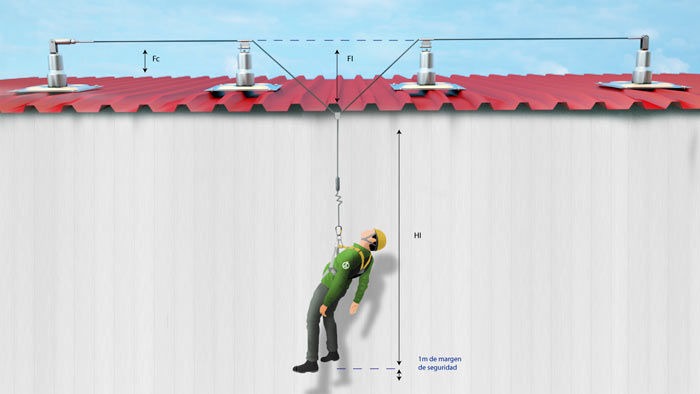 The Load at the End points

The factors affecting cable stretch are:

On the other hand, account should be taken of the multiplying effect of the cable, meaning that the lifeline end anchors are critical.

If, moreover, the lifeline is attached to an existing structure, then the regulations require the end anchors to withstand double the load contemplated in the calculation. 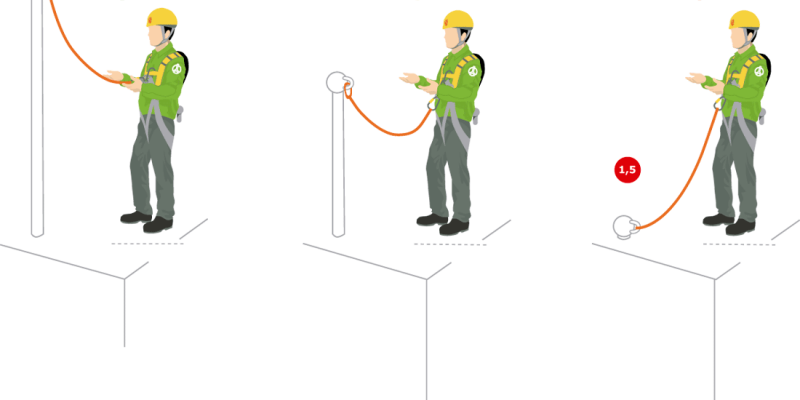 Based on the position of the lifeline in relation to the worker, the fall distance will either increase or decrease.

The prevention of swing falls is as important as the minimum free fall distance.

Flexible lifelines are primarily installed on roofs due to their lower cost in relation to a rigid system.

Solutions vary, depending on the type of roof and anchorage in question. 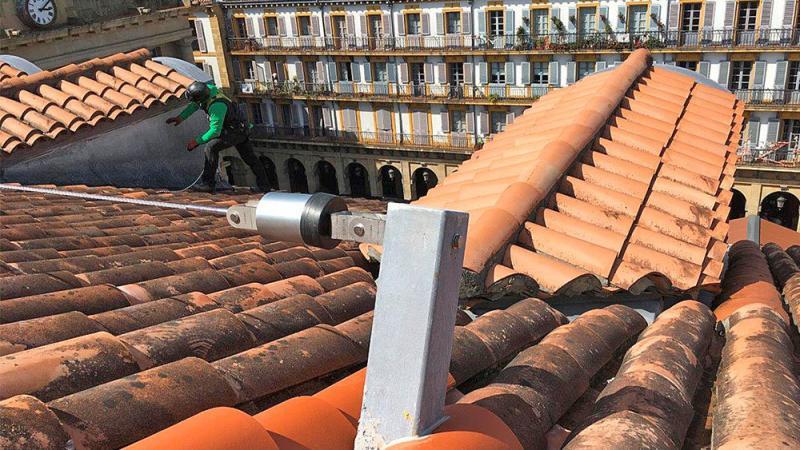 As already indicated above, cable lines transfer the loads to the end anchor points, multiplying the loads generated at the point of the fall. This is known as the cable multiplier effect.

Moreover, for structural anchorage, the standard establishes that they should be made for double the load calculated.

If the loads sustained at the end points are already going to be high, and given the fall factor 2 used for anchorages of this type, it goes without saying that particular care should be taken over the anchorage place of installation.

Read more
Depending on the roof type, these structural members can be: 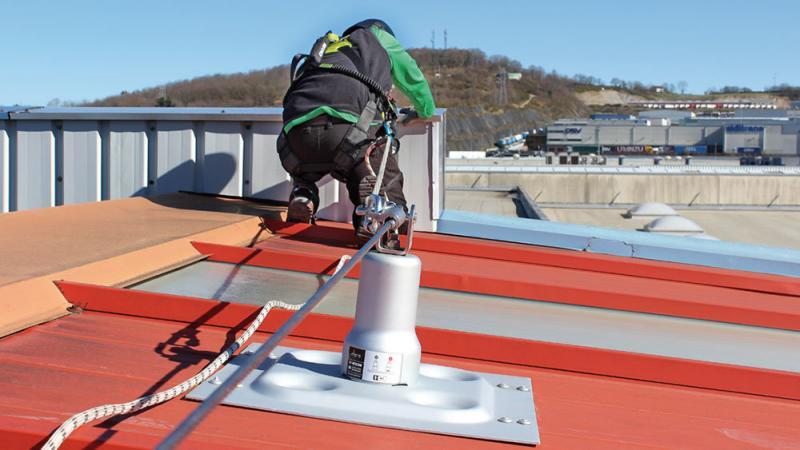 When seeking an anchor point to secure a fall protection system, it can be complicated to find the best structural member and difficult to value its cost.

To avoid having to find structural members, someone came up with the idea of Load Reducing Anchors (ARC).

The great advantage of this fixing system is that these anchors reduce the loads to under the load that can be sustained by lightweight roofs. Moreover, they considerably simplify the installation work and the cost can be calculated more accurately.

Read more
To achieve this, the anchor posts are equipped with an internal shock absorption system. They can be installed on:

Cranes are one of the most common applications for the certified horizontal lines. 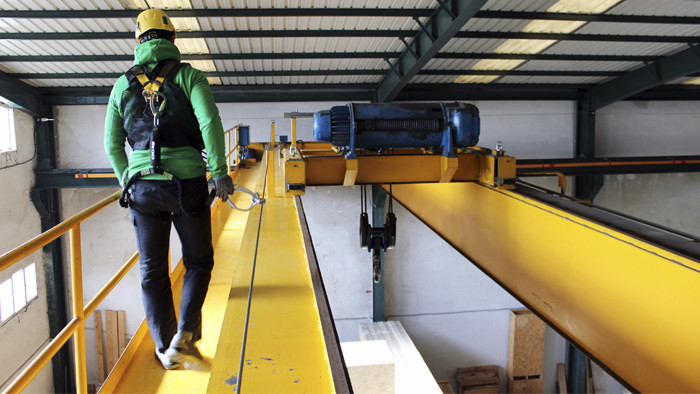 Movements along travelling crane beams for crane maintenance and repair work can only be protected with flexible horizontal fall protection systems. Let's explain:

Read more
There is no collective protection for this type of fall, given the fact that railings are insufficient for protecting against inward falls between beams. The fall factor is generally adverse: posts at least one metre high, generally need to be erected in order to prevent an excessive fall. 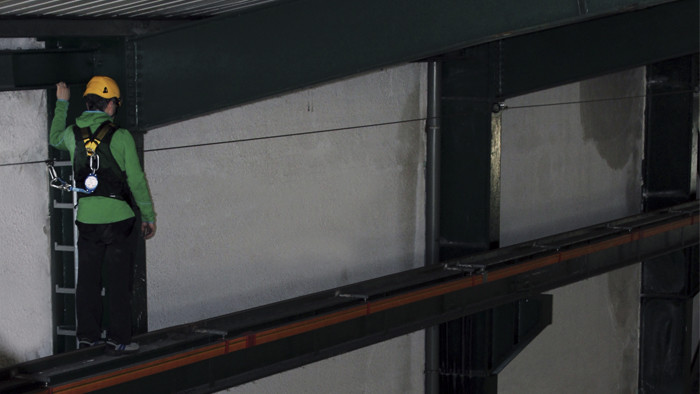 Access to the cranes from their running rails is also a high risk area for different level falls. Access to cranes often involves moving along the running rails. Unless the gangways are extremely wide, these movements are difficult to protect with collective protection systems.

Read more
In general, these are usually longer routes, in which the fall protection systems are secured to the structure of the industrial building itself. It is also normal practice to mount the lifelines above the user's head in order to greatly facilitate the calculation of the free fall distance. 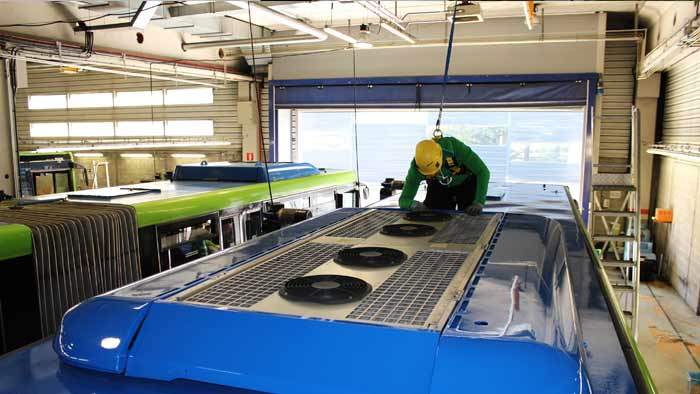 Read more
In addition to the height at which the fall protection system is mounted, with a view to reducing the free fall distance, other factors also come into play. These changes have resulted in the creation of specific systems for overhead work. 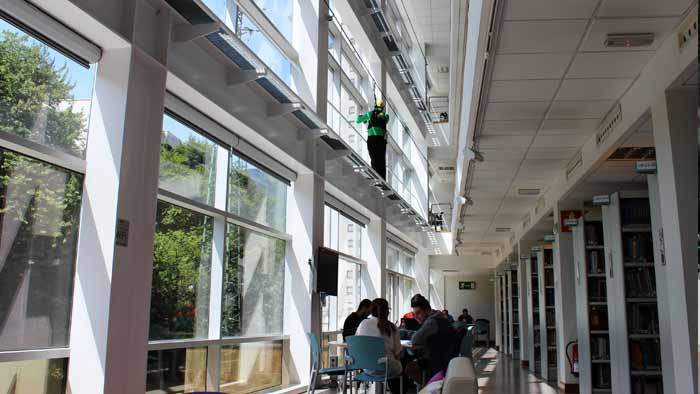 The installation of fall protection systems of this type is not a problem unless the fixing to the structure is complicated.

The necessary free fall distance is not such an important requirement as it was in the application above, unless dealing with windows on the first floor, close to the ground. In this case, the fall protection system shall be mounted with a fall factor of 0.

Unlike flexible lines, a rigid lifeline, does not deflect with the fall arrest impact.

It could therefore be obviously concluded that rigid systems are better than flexible ones, given the fact that:

Read more
Another fairly important factor, when deciding on which type of system to install, is aesthetics. In general, fall protection systems are not eye-catching, and those with cables are even less so. Many architects opt to install rigid systems in order to maintain the aesthetic principles of the building being constructed. On the contrary, the number of rigid protection systems is infinitely lower than flexible systems, due to the fact that: 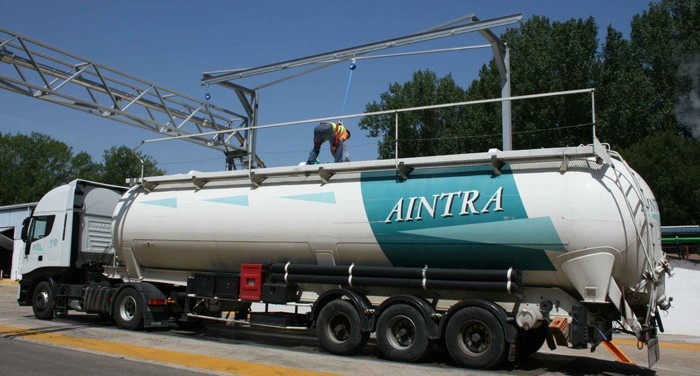 The work to open the tank covers generally requires the installation of rigid lifeline systems due to the fact that:

Read more
Elytra can carry out the study, calculation, design and installation of the structures to support these rigid lifelines. We can even handle the procedure to obtain official project approval by the Official Association of Engineers, if the customer so requires.

Fall protection systems for work positioning, or what is commonly known as "suspension work” or “Rope access works” must permit both types of loads: dynamic and static.

Read more
Rigid fall protection systems  are good at withstanding static loads of this type because, unlike flexible systems, they do not become progressively distorted. 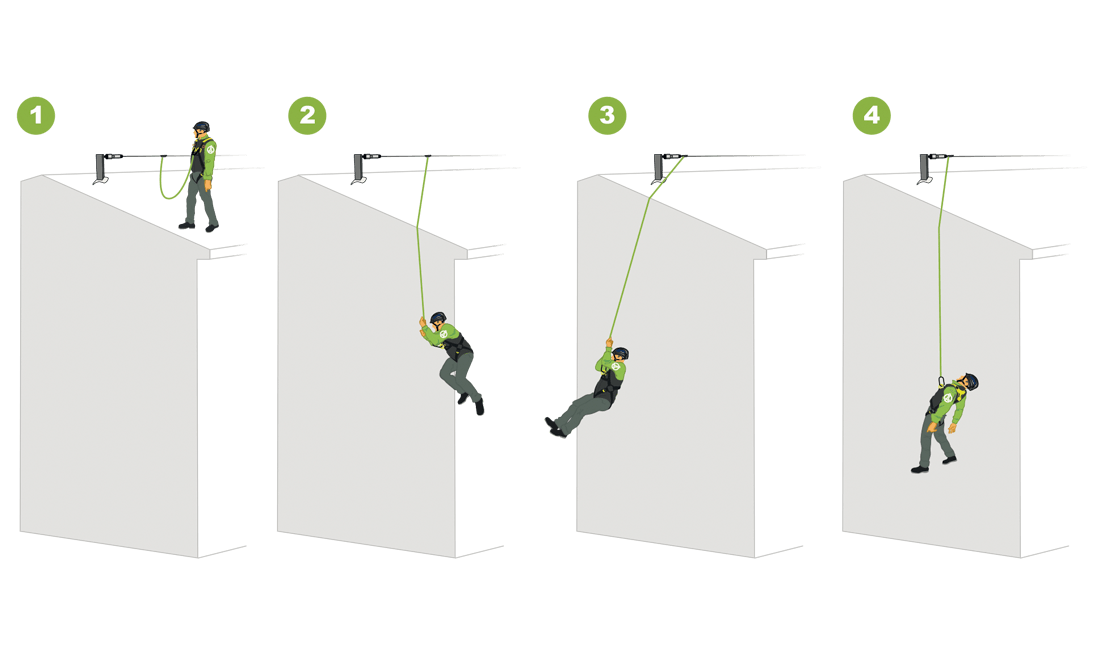 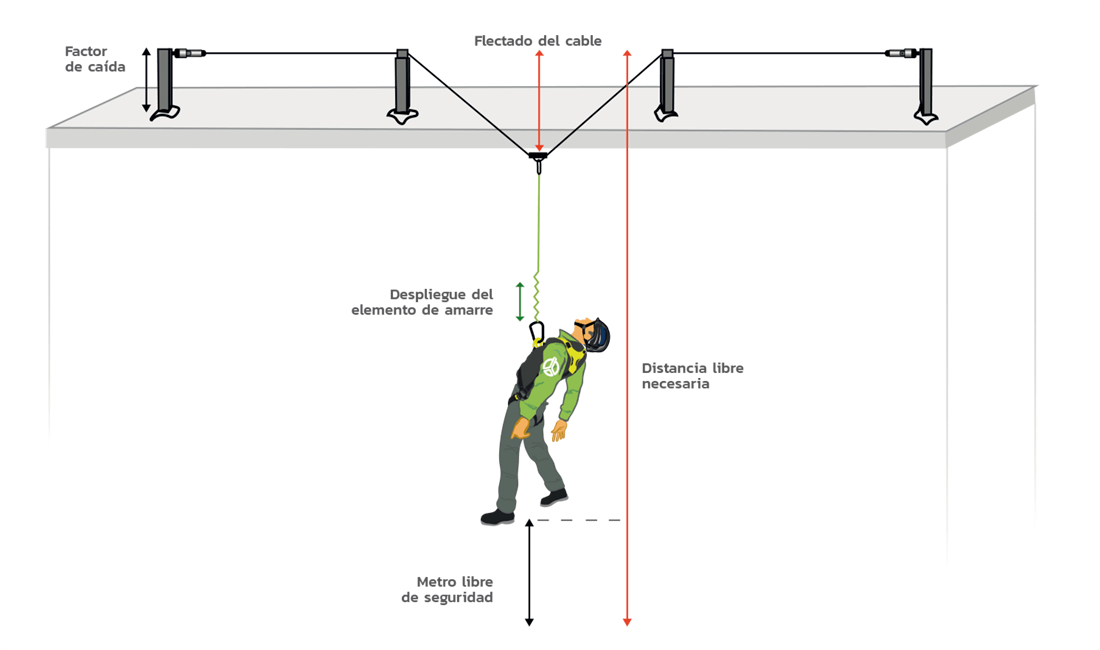 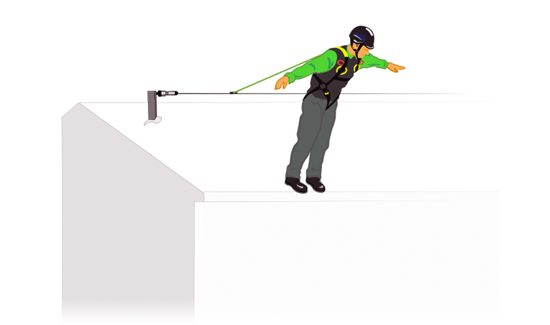